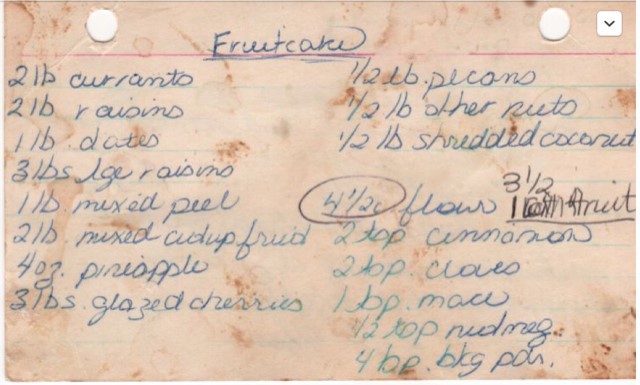 KH Senior Associate Elina Hill is a big fan of our podcast, Notice History. For our upcoming episode, she penned some of her thoughts on fruitcake, and what the special holiday treat means to her family!

Things got a little heated around the office in November as a surprising number of researchers came out of the woodwork to share their views on fruitcake in order to help prepare for an upcoming podcast. I wasn’t really aware of my own passion on the subject, until I heard myself telling a colleague that the only fruitcake worth eating was made according to my grandma’s recipe. “Sure,” Alice replied, “But my grandmother makes a pretty mean fruitcake too.”

My Grandma Dorothy, from Scotland, served as a RADAR operator during WWII, and met my Grandpa Irving, an RCAF RADAR technician, while serving in Northern Ireland. They were soon married, and when the war ended, my grandmother left Scotland like so many other war brides, sailing on the R.M.S. Aquitania to Halifax. She settled with her husband in Lakeburn, New Brunswick, where she become involved with the church and community, and began to raise her family.

One of her specialties was baking goodies, including pies, cookies, rum balls, and shortbread. Most of these were delicious, but fairly simple: the exception was her extravagant fruitcake. Her children remembered the grand challenge of chopping and mixing all of the heavy ingredients and lining an enormous pan with brown paper. “Dad’s muscles were always required to give the final stir in that big pot she used,” wrote my aunt Heather. Finally, the cake was soaked in rum and wrapped in wax paper, and foil – and let sit for months, if not years.

Her children assumed the cake was Scottish in origin. Heather noted that when her mother came to Canada, after the war, times were tough, and “certainly her Co-op cookbook would not likely have been the source” of the recipe. She didn’t remember other likely cookbooks, but recalled her parents were both willing to try recipes from the newspaper or radio. My mother, Sheila, and her brothers concurred: all thought the fruitcake was Scottish in origin. It just seemed more decadent than other New Brunswick treats.

In sharing stories, however, their cousin Jeannie noted that she thought the fruitcake, sent from Canada to Montrose, Scotland each year, was likely influenced, at least, by North American tradition. She explained, after a close look at the recipe, why the cake might not be local:

Another cousin noted that Grandpa Ross was famous for his Black Bun for New Year. Which is basically a fruitcake, wrapped in pastry; the recipe has many similarities to that of the fruitcake.

My uncle Michael suggested the cake was related to Dundee Cake, which originated in the 1700s in Dundee, and was mass produced in 19th century in Scotland. There are some similarities, to be sure.

After a bit more digging, I found that in fact there is some Maritime fruitcake history. A bakery in Harvey Station, NB, boasts of success selling fruitcakes slow cooked and made from a 120 year old recipe. There’s a wartime era “Maritime Cookbook” which contains a number of fruitcake recipes (alas, none my grandma’s). A collection of historic Nova Scotia recipes includes a 1912 recipe for Lunenburg fruitcake – again, not my grandma’s recipe. But some are close! And, of course, all of these recipes were imported from Europe (mostly Scotland and England) in the decades prior to their publication.

As the podcast approached, having talked up my grandma’s fruitcake, I felt compelled to share a slice with Alice, and the podcast team. She shared a hunk of her own grandmother’s fruitcake, which was quite delicious, much to my surprise. Mine had been rum soaked and settled, hers had not. Her ingredients were rich and nutty, and the spice balance was just right – different than mine, but still very good. I’m still not sure what it comes down to – there’s no particular ingredient that seems to make things perfect. Perhaps the magic is in the care that goes into making them, the history they carry, and the people who celebrate every bite.