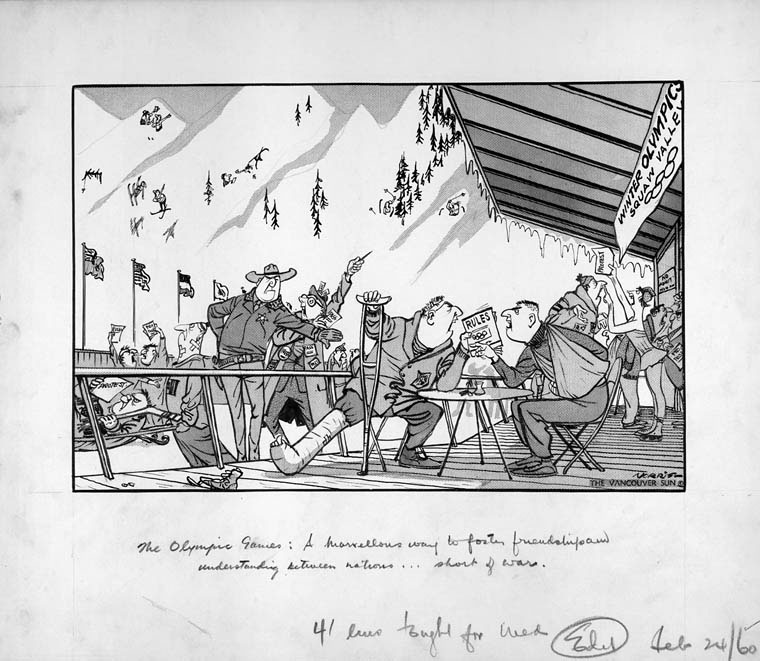 It’s 2018, and the 23rd Winter Olympics are upon us! Well…they were upon us when we recorded this episode.

The Olympics are a time for countries to come together through sport, and a time for countries to showcase not just their best athletes, but also their unique national identity.  In our first episode, Robin, Nick, and Keely explore the history of the Olympic Games as a tool for nation-building. They’ll also uncover how the national identities promoted by host countries often work to exclude or marginalize different groups – particularly Indigenous peoples.

Canada has hosted the Olympics three times: Montreal in 1976, Calgary in 1988, and Vancouver in 2010. During the opening and closing ceremonies of these Games, Canada was presented as an inclusive, welcoming, and diverse society.  But how successful were the organizing committees in promoting this image?

The Olympics are touted as an important event for fostering international relations, but past Olympics have also been the site of international tensions. The hosts will dive into the notion of athletes as representatives of their countries and will discuss how rivalries between Olympics teams can be a reflection of conflict and hostility between countries.

In Nick’s discussion of the historic Canada-Russia hockey rivalry, he mistakenly notes that Mario Lemieux and Wayne Gretzky played in the ’72 Summit Series. What he meant to refer to was the 1987 Canada Cup. Evidently, Nick’s enthusiasm for the subject caused him to misspeak! We apologize for the error.

Rider, Toby C and Matthew P Llewellyn. “The Five Rings and the “Imagined Community”: Nationalism and the Modern Olympic Games.” The SAIS Review of International Affairs, Vol. 3, No. 2 (Summer-Fall 2015): 21-32

Robidoux, Michael A. “Imagining a Canadian Identity through Sport: A Historical Interpretation of Lacrosse and Hockey” The Journal of American Folklore 115, 456, Folklore in Canada (Spring, 2002): 209-225.